Your complete blueprint to high pressure defending has arrived! This video series reveals how to force defensive mistakes and create more goal scoring opportunities in the final third

‘Get on the ball!’ This will be your team’s rallying cry after watching this video series on high pressure defending. Dutch 4-3-3 High Pressure Defending shows you how to run a complete training session that will give your players the discipline, decision making and determination to play with high pressure effectively and to win the ball more often in advanced positions

Do your players charge in like headless chickens when defending? Do they know the best time to close down and when to wait? High pressure defending can be highly effective at forcing opposition defenders to make mistakes but it can be disastrous when done badly. The key to doing it well is ensuring your players know when to press and when to hold back.

Dutch 4-3-3 High Pressure Defending is a special video series focused on improving your players’ decision making, along with the discipline and focus they’ll need to play with high pressure effectively. Dutch coach Marco Koolman covers all the key principles and presents a complete coaching session you can use on the training pitch to build a well drilled and focused high pressure defending side. 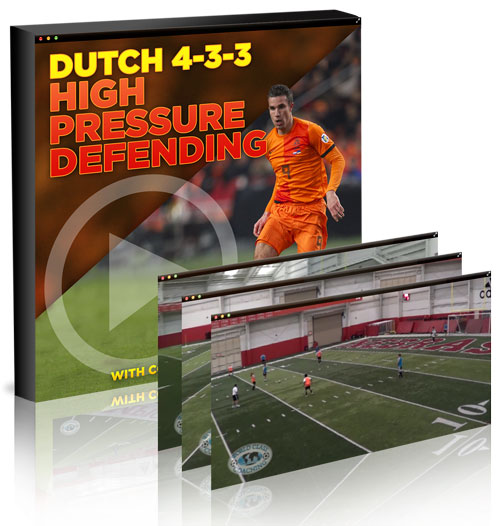 Playing with high pressure can be a game changer. It can enable you to grab a goal late in the game or to exploit a weakness in the opposition’s defense. Now you can discover how to add it to your tactical arsenal, and win the ball more often in advanced positions, through watching this special video series.

The 4-3-3 formation was born in the Netherlands in the 1970s to counter England’s 4-4-2. It has since evolved to become one of the dominant formations in modern soccer. Renowned for its flexible attacking options, the 4-3-3 is equally flexible in defense. It gives players the freedom to rush opposition defenders when they’re on the ball to force mistakes and to create goal scoring opportunities.

Playing with high pressure is as much to do with mindset, as it is with fitness or technique. To play it effectively it’s vital that players make the right decisions at the right time. Otherwise big gaps can be created for the opposition to exploit and to swamp the midfield. Conventional drills are great for developing technique or a set play. But when it comes to developing your team’s understanding of an entire defensive style, a more comprehensive type of training is needed.

Dutch 4-3-3 High Pressure Defending provides a complete training session for defending in the final third. This video series is packed with insights you can use for instilling the mindset and discipline your players need to play with high pressure around the opposition goal. Through practicing its principles and exercises, you can train your players to make the right decisions at the right time. This in turn will improve their chances of winning the ball around the opposition’s goal and gain the advantage. 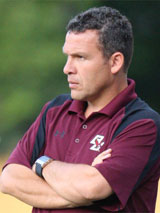 Whether in attack or defense, the Dutch 4-3-3 requires a high tempo. This video series shows you how to get your players used to defending with pace and how to familiarize them with defending in the final third.

Dutch coach Marco Koolman sets the tempo high almost immediately. Players are set the challenge of only having three passes before they have to shoot. This means they don’t have time to always play the safest pass, but instead have to advance the ball quickly. The opposing team, on the other hand, has the luxury of being able to choose when to close them down. Along with acting as a warmup, this helps to develop patience and discipline in high pressure defending.

The focus then shifts to training the forwards on how to use pressure to force opposition players to make passes that are easy to intercept. Koolman demonstrates when forwards need to apply pressure or drop off and regroup. He emphasizes the importance of waiting for the ideal situation to arise, rather than rushing in and being caught out of position. Koolman also explains how to use the sideline as your friend to squeeze opposition players into corners where they can be isolated and forced to make a mistake.

The next stage of the session focuses on building the team’s discipline. This is vital for keeping shape and now creating big gaps for the opposition to exploit. This applies, in particular, to playing in advanced positions and pressing opposition defenders on the ball. Koolman discusses what playing style to adopt when playing high pressure defending. 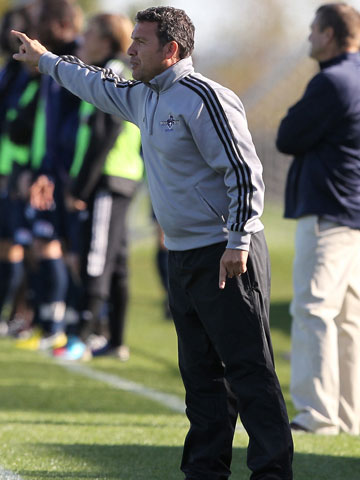 The key to defending with high pressure isn’t to endlessly go charging after the ball but to make the right decisions on when to press and when to hold back. This is a difficult mindset to develop with isolated drills. Dutch 4-3-3 High Pressure Defending presents a complete coaching session that shows you exactly how to train your players in the discipline and mindset needed to close down players effectively.

From watching Dutch 4-3-3 High Pressure Defending you will gain:

One of the Dutch 4-3-3 formation’s great benefits is its flexibility. This applies to its defensive options, with players having the freedom to press or hold position based on their own judgement. Consequently, they need to know when opportunities arise or whether rushing in will expose  big gaps in your own formation. This video series explains exactly how to train your players to develop this awareness so they make the right decisions and are able to win the ball more often.

WORLD CLASS COACHING is recognized globally for the quality of its soccer coaching resources, which are used by over 40,000 soccer coaches from around the world.  We wouldn’t be offering Dutch 4-3-3 High Pressure Defending unless it achieves our exceptionally high standards. However, if you are not 100% satisfied with the quality of Dutch 4-3-3 High Pressure Defending after six months of implementing its small sided games and exercises then please contact us for a no quibbles refund. 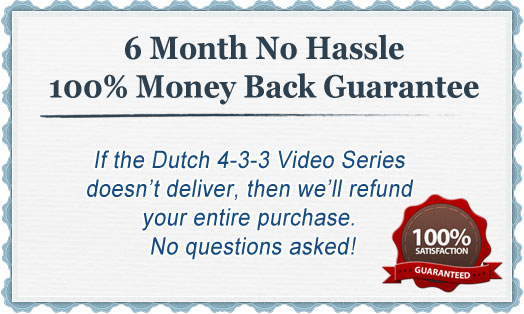 “If your players keep charging in at the wrong time, this video series shows you how to instill the discipline and decision making they are missing”

High pressure defending in the final third can be highly effective. It can force opposition defenders to make mistakes that can win you the ball in an advanced position and create more goal scoring opportunities. However, it can also be disastrous when your players charge like bulls on a red flag, without discipline or organization. This then gifts the opposition with big gaps to advance into.

Dutch 4-3-3 High Pressure Defending shows you how to run an entire training session that will give your players the discipline, understanding and familiarity they need to press effectively. Led by Dutch coach Marco Koolman, this video series will enhance your knowledge of all the key principles of high pressure defending and how to use it to grab goals late on and push the scoreline in your favor.

P.S. Dutch 4-3-3 High Pressure Defending is a video series focused on developing the discipline, concentration and decision making needed to defend with high pressure effectively. It features a complete coaching session you can use to improve your team’s defending in the final third so they can win the ball in advanced positions and grab more goals in the final minutes.

P.P.S If you are not 100% satisfied with the quality of the soccer coaching resources in Dutch 4-3-3 High Pressure Defending within six months then we will refund your purchase in full, no questions asked.

One last thing.  If you are an Elite Member, these videos are included as part of your Membership so there is no need to purchase them here.  Just log in to the WCC TC and click the Video Library and do a Keyword search for “Koolman”.  If you are not a subscriber to the WCC Video Library, check it out here as you can have access to these videos and hundreds of others for one low price instead of paying separately for each set of videos.